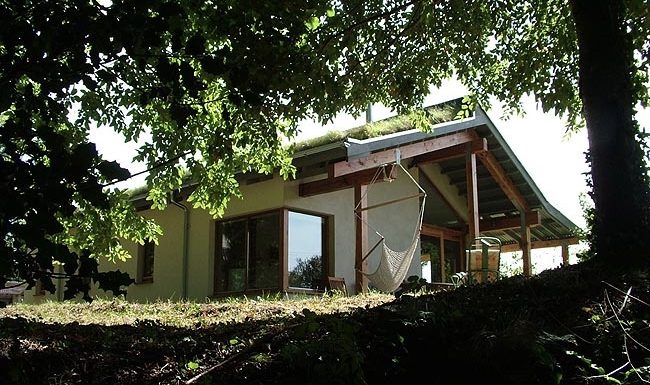 Hempcrete is a lightweight concrete, made of lime, water, and the shredded stems of hemp plants: hemp shiv. The material was developed in France over the last 40 years, by builders looking for a breathable material to use for repairing period buildings. Highly successful, it was also adopted for new builds.

The first hempcrete building in the UK was built in Haverhill, Suffolk in 2002, as part of a social housing scheme and BRE (Building Research Establishment) research project. Since then there has been a steady trickle of commercial and domestic projects, from the Adnam’s Brewery warehouse in Southwold to Kevin McCloud’s Triangle housing development in Swindon. To learn more about it, I visited Graham Durrant, Director of Norfolk-based company Hemp-Lime Spray, and saw the technique in action.

Building with Hempcrete: an Introduction

The project in question was the conversion of a range of brick barns in South Norfolk. Much of the hempcrete here was sprayed onto the old brick walls. Additionally, I saw it used to make new full-thickness walls where the barn once had open sides. Hempcrete new-builds consist of similar full-thickness walls, supported by a structural framework. The exposed surfaces are finished with a breathable render or cladding.

Through photosynthesis, plants and trees absorb carbon dioxide from the atmosphere and release oxygen. The carbon becomes bound in their fabric. Therefore, the way to lock carbon into a structure is to use plant-based materials like wood or hemp. Even factoring in the energy used in the building process, hempcrete structures can bind more carbon than is released putting them up.

Remarkably, hempcrete works both as insulation and thermal mass. In other words, like a highly insulated Passivehouse it slows the conduction of heat to the outside. Meanwhile, due to its thermal mass it can create a cool interior in the summer, like a masonry church. Thermal mass is also useful for keeping warm in the winter: for example, placed behind South-facing glazing, it will absorb heat from the sun and gradually release it back into the room.

A strategy used to make modern buildings energy efficient is to make them as airtight as possible, to reduce heat loss by convection. It is often achieved using airtightness membranes, and adhesive tape at the joins. These are installer-dependent, and risk failing over time due to perforation or degradation of the materials. A thick monolithic hempcrete wall, however, does not need these to achieve good airtightness.

Hempcrete is also breathable and ‘hygroscopic’, and naturally buffers the relative humidity in a room to the ideal range for human habitation, 40-60%. For the same reason, hempcrete buildings have very little problem with condensation.

Is hempcrete the future?

However impressive a material, its cost, ease and speed of use will always influence how widely it is used. Spraying, and the simple monolithic wall structure, help economise on time and expense. The ability to use it for a variety of building types and styles is also vital. Hempcrete’s versatility is demonstrated in the video by the following projects:

When correctly used, this carbon sequestering material has impressive thermal and moisture handling abilities. Its versatility only adds to its promise. So far, hempcrete construction is only carried out by a small number of people in the UK. More people need the specialist training; government policy needs to encourage the use of carbon sequestering materials; and further research is needed directly comparing its performance with standard methods.

What has already been shown, however, is that this material can be used to produce beautiful buildings, sustainable both in their fabric and in use.